Halloumi or challoumi is the Cypriot national cheese. It originated there and has been made on the island since the Byzantine period. It is a brined semi-hard cheese made from a mixture of sheep and goat’s milk.

Halloumi has been an important and unique element in the Cypriot diet. It was a particularly valuable food in rural areas prior to the availability of household refrigeration. During this part of Cypriot history, the production was a social activity.

Families and neighbors in small villages would gather together to produce cheese. The cheese would be produced under the supervision of a woman called a galatarka or cheese woman.

While some speculate that halloumi has its origin with Arabs, others point to the fact that halloumi was being made by Cypriots prior to the Turkish invasion.

The name halloumi comes from almi, a Greek word meaning salty water. The name most likely refers to the brine in which the cheese is stored and which acts as a preservative.

Fried halloumi is often served as a part of a meze platter.

Place the halloumi slices on a plate with the olive oil and brush lightly to coat both sides of each slice of cheese.

Sear the cheese in the pan, 1 minute on the first side and 1-2 minutes on the other side. It will smoke (open a window), and form a deep brown crust. The cheese should soften but no liquid should escape – poke with your spatula to test – but it will not melt.

Place fried cheese on a plate and garnish with pepper, herbs, tomatoes, and vinaigrette. If you are booking a trip to Cyprus, be sure to visit the important holy … END_OF_DOCUMENT_TOKEN_TO_BE_REPLACED 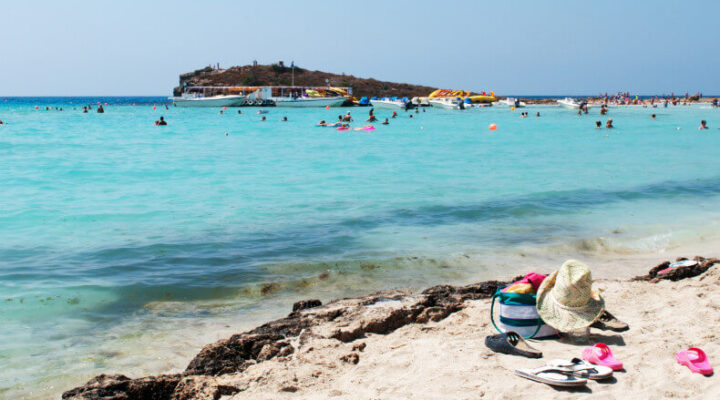 Are you considering a trip to Protaras? Creating an exciting itinerary … END_OF_DOCUMENT_TOKEN_TO_BE_REPLACED